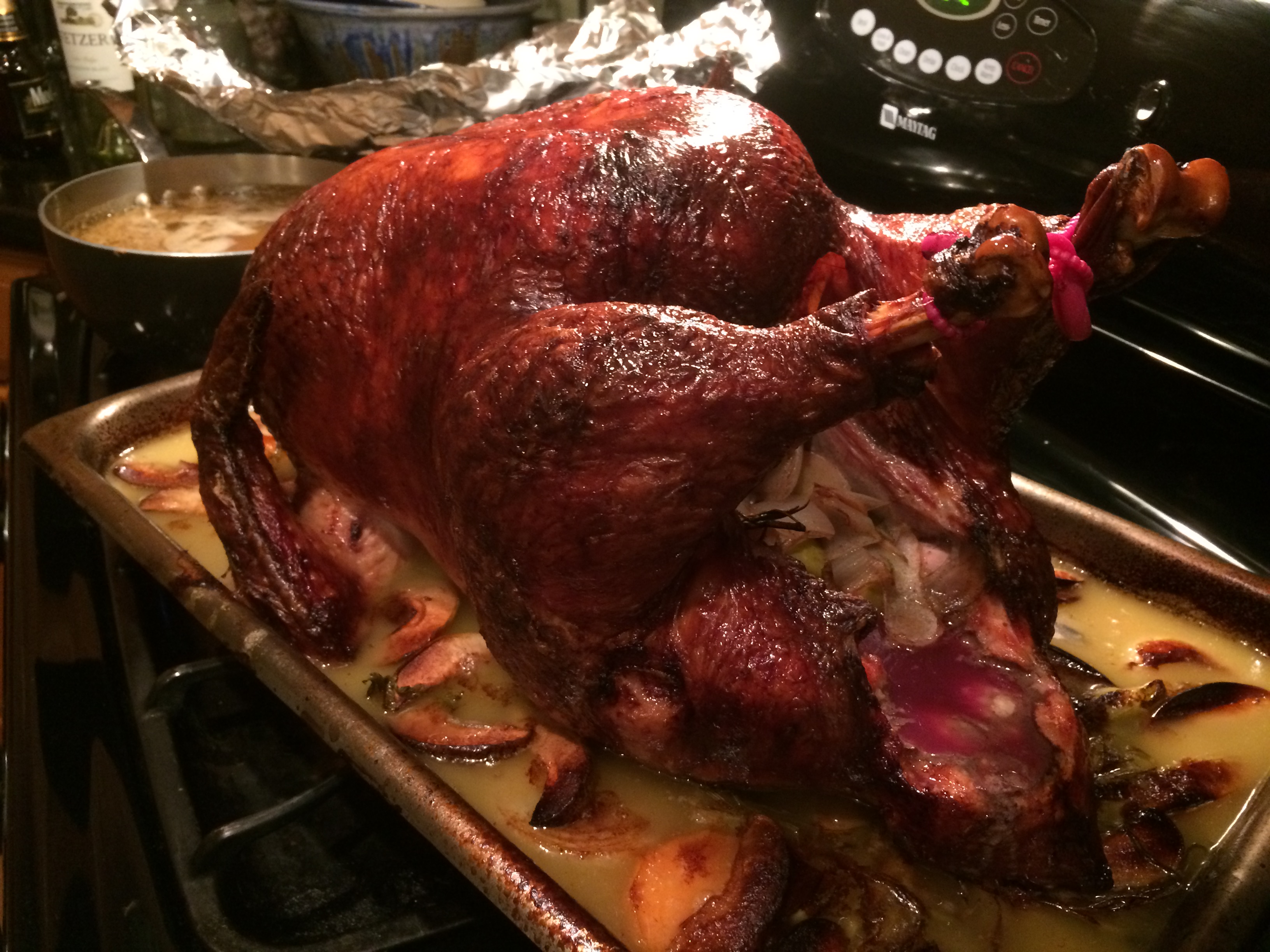 This is a tried-and-true method that I’ve used for years. It’s easy and its fail-safe. It’s a combination of two recipes I really like, from Food Network’s Alton Brown and NPR’s Lynne Rosseto Kasper, along with some adds from how my dad used to do it. Alton’s recipe is crazy simple, Lynne’s is complex, Dad’s was, well, Dad’s. This IMHO combines the best of them all without making it too fussy.

If you're cooking up a big Kennedy Ranch turkey, it'll need some time to defrost.  Take it out of the freezer no later than five days before you want to serve it, and put it into the refrigerator to thaw slowly.  It can continue defrosting as it brines.

Two or three days before you want to eat... combine in stockpot:

1 gallon chicken stock (use home made, please. If you absolutely must, use Swanson’s Low Sodium).

Simmer this over medium heat, stirring occasionally, until it is hot through and the solids have dissolved. Let cool and refrigerate.

Heat some chicken fat or olive oil. Brown the turkey’s neck and giblets. Remove meats, add two chopped onions to pot and sauté until onions are clear. Don’t let it burn. Stir in one chopped carrot and one chopped rib of celery, stirring up browned bits from bottom of pot. Add neck and giblets, along with a few sage leaves, two sprigs rosemary, kosher salt and fresh ground pepper. If you have a chicken carcass you’ve been saving to make stock, throw it in. Add water, a couple of quarts, cover and let simmer for 2 hours or more. Remove from heat, strain, let cool and refrigerate. Once they’re cool, chop the giblets fine and shred the meat from the turkey neck saving them for use in the gravy.

Wash, rinse and sanitize a cooler, letting it air dry completely. 2 capsful of bleach in a gallon of water is an effective sanitizer. Don’t rinse it or hand dry, otherwise it won’t be sanitized.

One or two days before you want to eat:

Put your turkey in the cooler and pour the cider mixture over it. Add enough heavily iced water to cover, put the cooler’s lid on and put it in a cool place. Turn it over at least once during the day. Make sure your ice doesn’t all melt, you want your bird to stay good and cold. Estimate one hour per lb. for brining.

The day you want to eat:

First thing in the morning, remove the turkey from the brine and rinse it well, inside and out. Run your hands between the breast meat and skin to loosen skin from breast. Pat dry and put it in the fridge uncovered for several hours to dry.

Put a large cast iron griddle, a pizza stone, or a couple of large cast-iron pans on the floor of your oven.  Something that will collect and radiate heat. My griddle fits nicely on a couple of molded rails on the bottom of the oven, allowing for an inch or so of space between the bottom of the oven and the griddle.  If you are using an electric oven with the heating element at the bottom, READ THE NOTE AT THE END OF THE RECIPE!

Put the oven rack as low as possible, making sure there's some space between your heat radiating device and the rack.  Preheat oven to 500 degrees for an hour, long enough for that griddle to get to temperature. While it's preheating, in a roasting pan, set out about three halved carrots, three halved stalks of celery, three onions cut into rounds. This will be your turkey “rack”. Scatter a rough chopped Granny Smith apple and several leaves of fresh sage over veggies.

In a microwave safe bowl, combine another chopped Granny Smith apple, half a sliced onion, four sprigs of rosemary, six leaves of sage, a cinnamon stick and a cup of water. Microwave for five minutes, drain and put solids into the turkey cavity. Put turkey onto your vegetable “rack”. Rub turkey with softened butter, sprinkle with fresh ground pepper and put it in the oven. Before you close oven door, pour enough dry white wine into your roasting pan to cover bottom to about 1/2”, about four cups. Close the door and roast for about 1/2 hour.

Stick a meat thermometer into the breast at this point, making sure you keep it in the meat and don’t hit a bone.

Roast until thermometer reads 160-degrees, basting occasionally with juice from the pan. It will take 2.5-3 hours for a 20 lb bird. Check the dark meat, it should be at least 155-160 degrees. Don't pull it out early, there's enough moisture in a Kennedy Ranch turkey to let the breast get a little warmer while the thighs cook completely.  When it’s done, remove from the oven, put it on serving platter or cutting board and cover with foil or an inverted bowl. Let rest a MINIMUM of 15 minutes, more is better. Besides, the gravy will take a while. Start carving when the gravy is done.

To make the gravy, heat up all but one cup of the giblet stock you made previously. Remove veggies from the pan, put them in a food processor and chop roughly. Pour off juice from the turkey pan into a fat separator to remove excess fat. Pour defatted turkey juice back into roasting pan along with 1/2 c apple cider and 1/2 c of the dry white wine, and heat it over low heat on two burners. Stir up brown bits from bottom of the pan. Heat until liquid reduces by half. Add heated stock and stir until it’s bubbly.

It’s a lot of typing but it really is easy. And worth it. Key to success- a good meat thermometer. Don’t try this without!

NOTE:  If you don't have something to absorb/reflect heat from the floor of the oven, or if you are using an electric range with the heating element on the floor of the oven, your best bet for cooking one of these big birds is to start it cooking breast-side-down, and flip it halfway through cooking.  That will ensure that the thighs get done before the breast gets overdone.  It's definitely a bit of a hassle but the results are very much worth it.  You'll need help, and preferably some silicone hot pads.  We did it this way every year before we figured out the griddle/pizza stone trick.