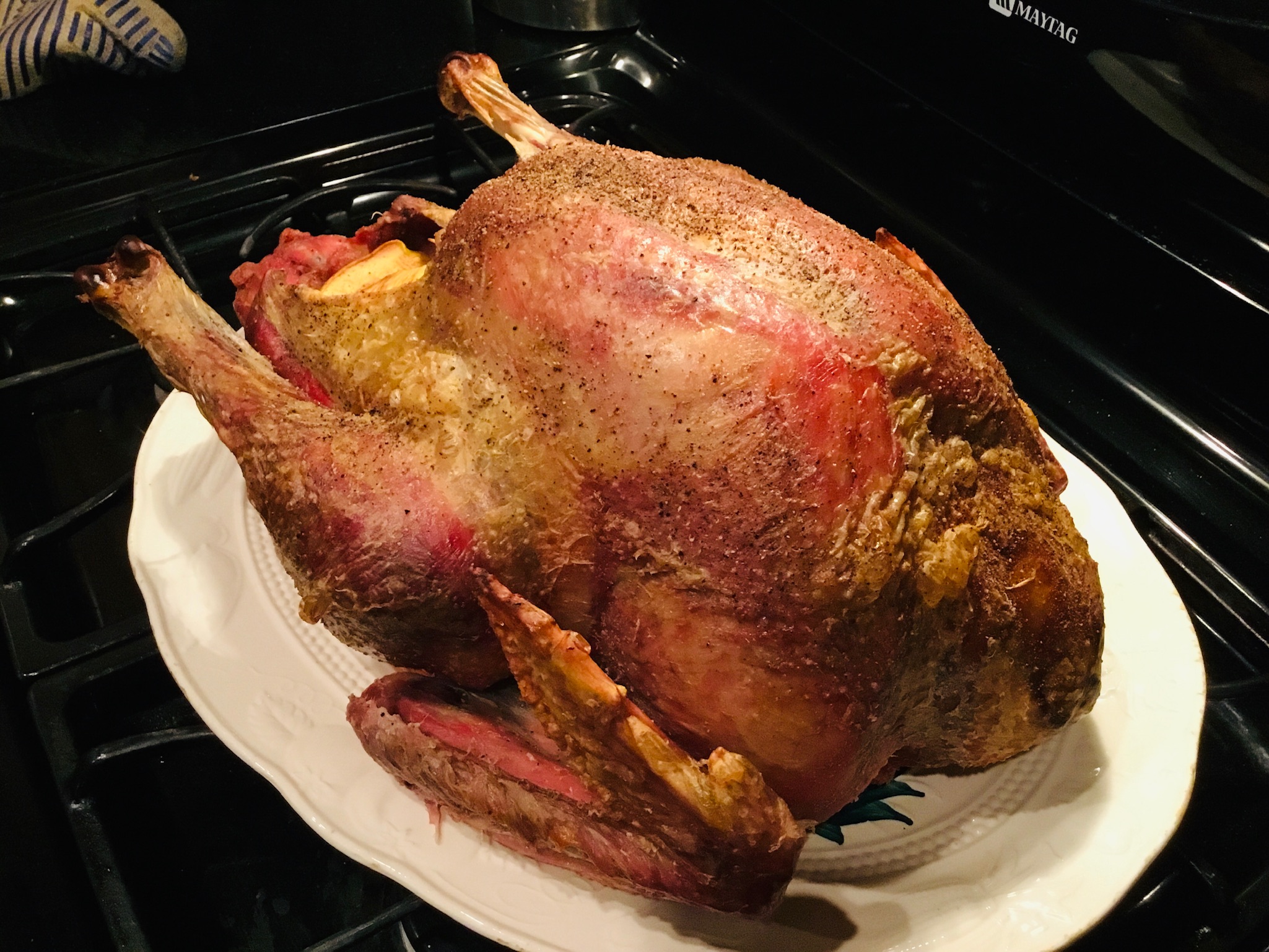 Thanksgiving starts early here at Kennedy Ranch.  We've been raising this year's turkeys since mid-summer, and started processing them for holiday meals a couple of weeks ago.  And... lucky us... we get to do a little product testing.  You know... just to make sure they're really turkeys.  (wink wink).

I have crunched a bunch of other peoples' ideas over the years into a wet-brine turkey recipe that I absolutely swear by, and that is posted here on the site.  However, one of our favorite customers just loves dry-brining his Kennedy Ranch turkey, so I thought I'd give it a shot.

I wandered around the internet and found a dry brine recipe from the New York Times that got rave reviews, here. And, well, IMHO, it needs work if it's going to get a re-boot at our house.  Which I'm very likely to do, but it won't show up on our Thanksgiving table this year.  Needs more noodling before I trot it out for a crowd.

The skin is crisp and far superior to that of a wet-brined bird.  No comparison.  While my wet-brine recipe has evolved over the years and now produces a decent skin crispiness, this recipe smoked it.

The apples, onions and herbs in the body cavity did a nice job providing a subtle flavor in the meat adjacent to the cavity, and (bonus) provided flavorful goodies that I re-used when I made turkey stock from the carcass.

I really missed the apple-infused subtlety in the breast meat that my wet-brine recipe provides.  Our turkeys have tremendous flavor all on their own, so this was a hugely enjoyable meal for us, but my existing recipe adds *just* that little bit of extra... something... that screams "THIS is a HOLIDAY meal!!"

The not at all good:

The recipe calls for "salt", not "kosher salt" or any other kind of specific salt.  So I used "salt".. basic table salt. WAY, WAY, WAY too salty, even though my bird was at the large end of what the recipe called for.  Definitely needed to be kosher salt!

Also - even though our birds have a lot of fat (and therefore a lot of drippings) and the recipe calls for wine in the pan to facilitate gravy-making, there wasn't enough liquid left to avoid a dried-out crust in the pan, with no liquid available for gravy.  Good thing I wasn't counting on it.

How I'd do it next time:

First, the skin treatment is a real keeper.  Allowing the bird to dry for a day before you roast it, and running your hand under the skin to separate it from the meat, both add to crispiness and are great techniques (I do both of those things with my wet-brine recipe as well as when I roast a chicken).  This particular bird was on the small end for us and thus hadn't developed the subcutaneous fat that our 20-lb birds do, and so I used the butter the recipe called for under the skin to add some fat to the proceedings.  Next time, if I need to add that fat, I will sautee some minced dried apples in the butter before I use it, and mix in some herbs.  There are parsley and thyme in the cavity so I'd echo those flavors here.

I'd obviously use kosher salt rather than "salt."

The gravy development (liquid, veg, etc. in the pan) isn't nearly as good as what I do with my regular recipe, and I'd steal that procedure wholesale from my wet-brine turkey recipe.  For this recipe, because we're using parsley and thyme as our herbs, I'd switch the basil from that recipe for thyme, and sprinkle fresh parsley on the gravy just before service.

Or... I can just give our customers' recipe a try next time.  They are some of our best providers of food photos... everything that comes out of their kitchen looks amazing.  Maybe if I said "pretty please"?